For discussion of all aspects of the New York legends.
Post Reply
24 posts

Paul at the Albums That Should Exist downloads blog has interesting VU post. Here's his introductory notes for it:


I've got some really good Velvet Underground albums to post. It makes sense to start at the beginning, with their 1965 acoustic demo recordings.

Most of these songs were included on the "Peel Slowly and See" box set. However, I thought they were presented in a really dumb way. For the first six songs here (all acoustic demos recorded in July 1965), multiple takes were included, but in each case they were lumped together as one track. So, for instance, you couldn't just hear a demo of "All Tomorrow's Parties," you had to hear five versions of the song, each version almost exactly the same as the last. I grow very tired of bootlegs that have the same song repeated over and over. So I picked the best version of each song and only included that.

The next five songs are more acoustic demos, from a December 1965 session. These also are from the box set, but they were put on another disc. I think it's better having all these demos together. Finally, there's an unreleased instrumental from very early January 1966 as the last song. It fits the acoustic sound of the rest of the album, because it's just a guitar and bass playing.

Paul's got some real intriguing proposed albums there. It's a new site so the links are still good.

I did something similar. Editing out the best versions of the '65 demos from PSAS. Didn't think of sequencing them with the second set of demos. I'll give it a listen. I've made albums from Cale era demos & gymnasium tracks and from the outtakes from Loaded. I look forward to what he does with these.
Top

It's the 2012 Prominent Men bootleg LP. The best of the first demos on one side and the second demos on the other side. First time the earlier demos made a sequence I could listen to. Worth buying. I wish I could post the cover, but here's the link

There was also an earlier vinyl bootleg of this stuff from 2001, called Something Different 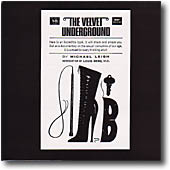 it includes Booker T and Guess I'm Fallin in Love, as well as All Tomorrow's Parties, which seems to be missing from Prominent Men.
Top

I've also always gone with the late 66/early 67 date. From memory the argument they were from late 65 stems from the fact they were supposedly recorded at Ludlow Street and by late 66 Cale had moved out from there, but I've always thought it more likely if something was incorrect it was the venue rather than the date. I ca't see why they would have written Here She Comes Now, demoed it, then abandoned it for about a year.
Keep the faith
Top

There's some on the sleeve of either the Etc or And So On bootleg LP, sourced from Sterling I think, that states those songs were recorded at a place on Broom St not Ludlow. I suspect Ludlow is just lazy fact checking on the Peel Slowly box. The sound is very different from the earlier session so it would make sense for it to be done in a different space.

That session is a bit of an oddity of course, with the majority of songs unreleased and a rather different sound and feel from anything else they ever did. But thanks to the Jan 66 Warhol tape, we know what the group sounded like at that point and it ain't this.
8-7-6-5-4-3-2-1
Top

Mark wrote: ↑
23 Dec 2018 14:26
There's some on the sleeve of either the Etc or And So On bootleg LP, sourced from Sterling I think, that states those songs were recorded at a place on Broom St not Ludlow. I suspect Ludlow is just lazy fact checking on the Peel Slowly box.

Made me dig into available info about those "Broome Street" demos:

Olivier's VU Web [and other sources]:
1965 spring: John Cale Lou Reed moves into the 56 Ludlow Street apartement
1965 early autumn: the band moves to 450 Grand Street
1966 January: the band starts rehearsing in the Factory
1966 August: the band leaves the Factory for a rehearsal space on Broome Street [somewhere found address of 424 Broome St. for this place]
1966 autumn: John Cale and Sterling Morrison got a place on East 10th Street just east of First Avenue*.[Uptight p.97]
Shortly thereafter, Lou Reed got his place on East 10th just west of First Avenue*.[Uptight p.97]
-- Sterling Morrison [Uptight p.97]: "so the three of us were living about 50 yards apart. We would have lived together if we could have found a place large enough. We were hanging around together day and night."

The liner notes of "(and so on)", first issued in 1982, are written by Philip Milstein; in which he is heavily quoting Sterling Morrison, including "these songs were recorded in an unheated studio on Broom St. in the winter of 1966, probably Novermber or December."
In "White Light / White Heat" (Unterberger's book) on page 131 is a picture of the "early Velvet Underground demo, with song titles handwritten by Sterling Morrison." [the six titles of the Broome Street demos]

Now looking to this date and the VU&Warhol timeline, made me think if these demos and especially "Here She Comes Now" could be related to the "Mod Wedding" held 1966.Nov.20 in Detroit...
Nov.13, Detroit Free Press: "They said they're [VU] going to play traditional wedding music. You know. 'Here comes the...' "
Nov.21, Detroit Free Press: "On stage, Warhol's 'superstar' Nico sang a bizarre and totally unintelligible song accompanied by the electronic tones of the Velvet Underground, a rock 'n' roll group. Nico, a tall, lanky girl with straight blond hair and a gaunt face, began to sing just as the microphone went haywire. As a result, she sounded like a Bedouin woman singing a funeral dirge in Arabic while accompanied by an off-key air raid siren."
Top

... made me think if these demos and especially "Here She Comes Now" could be related to the "Mod Wedding" held 1966. Nov.20 in Detroit.

Related in what way?
Top

Hi. I’m new to this forum. Happy to see other folks obsessing about this stuff.

My own feeling on the acoustic demos found on Peel Slowly & See etc. is that they are early arrangements and would date them c. 65.

When you consider the Velvet Underground & Nico was recorded in 66, and features arrangements that are a hell of a lot more thought out and developed, it becomes harder to imagine they were busting themselves with hillbilly versions of ATP around the same time as the sessions in Sceptre studios.

To my ear, the acoustic demos sound like a band still trying to figure themselves out, trying out styles and experimenting with folksy arrangements.

But I’m new here and so keen to hear your views :)