For discussion of all aspects of the New York legends.
Post Reply
16 posts

Singer-songwriter Suzanne Vega explores Lou Reed's complexities with New Yorkers who knew him well.
Suzanne first saw Lou Reed perform when she was a student in New York. In that first concert she saw him intimidate and upset the audience in the first half of the show but, after the interval, he was another performer entirely. This was Lou bestowing all his charisma and talent to fans.

She explores the two sides of Lou Reed in a programme celebrating the imminent unveiling of his archive. Lou's widow, artist and musician Laurie Anderson, has donated it to the New York Public Library for the Performing Arts.
Suzanne Vega lived a couple of blocks away from Lou and Laurie and often visited them at their country home. She wanted to get him know him better, but it was obvious that he needed to protect himself. Now, Suzanne talks to other New Yorkers who knew and worked with him.

Along with producer Judith Kampfner, she has an exclusive sneak peek at some of the archival gems - the jewel, an exclusive for the BBC, is the opening of an iconic song from a 1965 demo.

What is more interesting for us is the playing of a demo version of 'Waiting' that Reed recorded probably at Pickwick..

His widow and an archivist were sorting the musician’s belongings to donate his archive to the New York Public Library For The Performing Arts when they found the sealed object.
Judith Kampfner, who has produced a BBC Radio 4 show about Reed’s life and music, featuring a one-minute, eight-second “fragment” of the demo, airing for the first time on what would have been Reed’s birthday, said: “One of the last things they found on a shelf, behind his desk, behind a row of CDs was a tape.”
She told the Press Association: “It was completely sealed. They realised that this was something that Lou had sent to himself in 1965.”
Reed is thought to have sent the tape to his parents’ house in Long Island to secure what was then known as “a poor man’s copyright”  – designed to register intellectual property.
“Maybe he had forgotten about it because it was never opened. It was in a box, sealed with tape,” Kampfner said.
The demo, the earliest known recording of the song, is “completely different” from the finished version loved by fans.
“It’s harmonised with another male voice … At the time Lou was working at Pickwick Music, having to write songs very, very fast for this record company, churning out music. It’s thought it’s one of his co-workers there.

“Obviously I’m Waiting For The Man is about going to meet your heroin dealer. Reed was trying to be gritty, writing a song about heroin, but (his tone) comes across as quite innocent.
“He was a very shrewd and fascinated observer of street life, the underbelly of New York, and that’s captured really well in that song…
“When the song comes out, Lou has found that gravelly, strong voice. This is very youthful and sounds more innocent.
“He knew what he wanted to say in the lyrics but he didn’t know how to say it musically. He hasn’t found his tone yet.”
The early demo could be released from the tape, which technicians initially struggled to get working.
Archivist Don Fleming tells the programme: “What you hear …  is Lou’s still trying to figure it out…
“It’s not the rock-and-roll Lou that most people might want to hear or be expecting to hear. It’s hearing an artist developing.”

This tape from his archive is postmarked May 65.

Hope this is a positive sign that we'll hear much more audio from Lou's archive!
Top 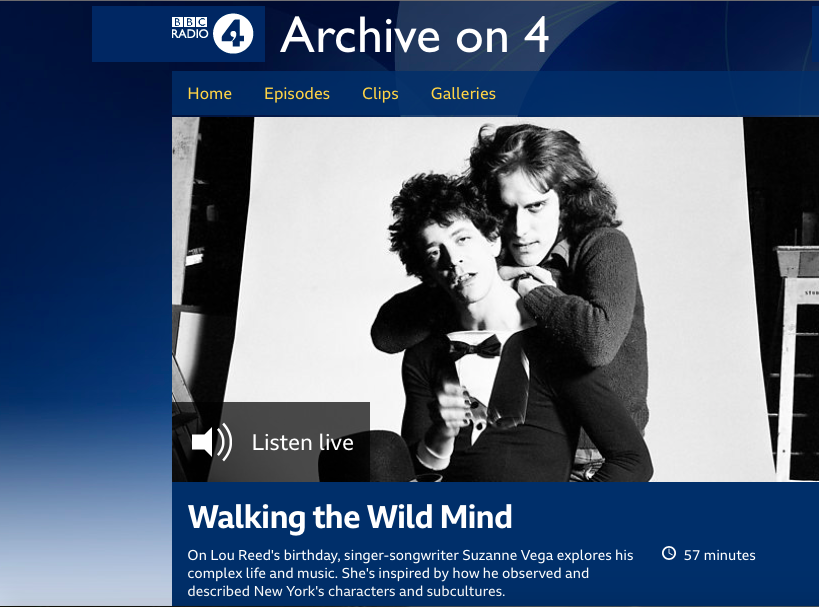 I just caught the tail end of this BBC programme.
Sounded interesting, although I don't know what Suzanne Vega has to do with the price of fish.
It will be on the 'listen again' facility for a month I would imagine.
They played the 1965 demo of IWFTM at the end with someone from Pickwick on harmony vocals. A million miles from the VU.
any sounds that we feel would detract from the performance has been left in place
Top

Thanks a lot.
Top

Thanks Olivier!
It's pretty close to a slower version of the acoustic demo on disc 1 of PSAS, minus the viola, so it's a stage in the development of the VU. He harmony is just like the one Cale does on the July tape: they grew massively by the end of 1965!
What was more interesting to me was Don Fleming revealing that there are 11 songs on the tape. One odd detail was Fleming saying they discovered the tape at the very end the process of archiving, but it was photographed in 2014.
Top

Interesting that the post mark is 11 May 1965, the same date as given for the demo including Heroin which surfaced just after Lou's death. Could just be coincidence or could be from the same session, although there's no 'WFTM' listed on that demo. Sounds very similar in style to that version of Heroin to me though.
Keep the faith
Top

I just saw this thread. Is there anywhere else I could grab the FLAC? Thanks.
Top

Could You please reupload this, I've would be very grateful.

contact me direct at velvetfan@aol.com and if you want an mp3 copy I can repost it on WeTransfer put "VU BBC show copy requested" in the heading.
Top
Post Reply
16 posts