For discussion of all aspects of the New York legends.
Post Reply
18 posts

Coming in July by the looks of it 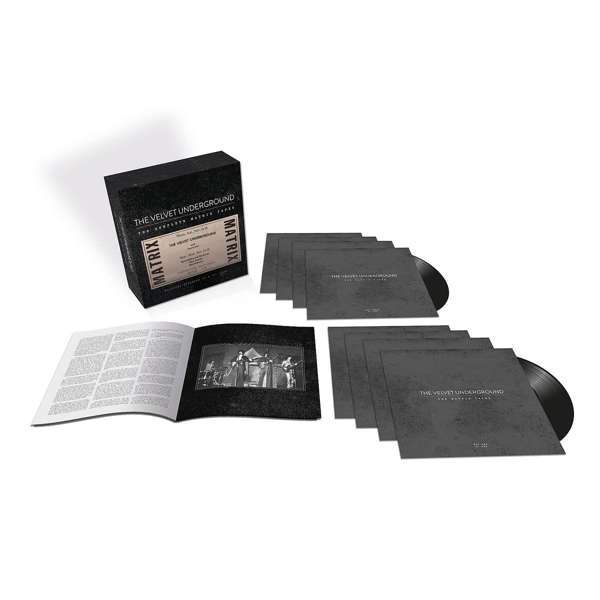 Almost certainly is priced out of my league, but I do wonder what the lineage will be. Is this straight from the analogue masters?
Bargain bin gold, favorite bands, concerts, photos, and my record collection: All Good Music
Top

Artwork is the same as the CDs, probably the vinyl will be from the same masters, we’re not talking about a high end package. I bought the Quine tapes vinyl, but will skip this one.
Top

Sod it, couldn't resist and have just ordered this from hhv.de - just under £100 posted, which isn't *that* bad considering it's 8 LPs and the CD boxes go for most of that these days.
Pressing quality gets a thumbs-up from the hard-to-please Hoffman forum too..
Top

Can't wait to see (and hear) this among my VU vinyl!
Top

just ordered mine from Amazon France for a total of 111.00 bucks (standard shipping) - not bad considering there are 8 lp's in there. I have the quine, live 69 lp's and this on cd... this is by far the holy grail of the 3. Were the CD's ever released stateside?
Top

I thought the vinyl sounded amazing on this. Deeper, in terms of detail, and more open than what I was used to previously. Made it through all 8 records and loved every minute of it. I think someone on the Steve Hoffman forums said it was akin to having the VU in the room with you...I'll concur with that. What do others think of the sound?

Live 1969 is my favorite album of all time, and it's been quite a journey, beginning with the cassette in high school, to my promo vinyl copy (which had Beginning To See the Light, Sweet Bonnie Brown, absent from the cassette and a pleasant surprise then) to the CD (which added I Can't Stand It and a second version of Heroin [good but it really hampered the album's flow]) to the add'l tracks on VU deluxe, and finally the Complete Matrix Tapes, on vinyl at last.

The songs on this 8LP were more powerful than ever, and the more natural sound led to many new musical revelations for me. Hard to sit still for any of it. Especially enjoyed the 1st version of White Light/White Heat for its sheer ferocity. Sister Ray has numerous epic VU moments that really came to life for me on vinyl (pockets of classic guitar frenzy and astounding rhythmic cohesion across the song's changing soundscapes). And while Live 1969 did indeed seem to find the best versions, every version here offered its moments. Even the slightly disengaged version of Pale Blue Eyes (which doesn't even approach their version in Texas), or somewhat templated Venus in Furs (but with nice organ work) are wonderful to hear. Every version of Waiting For the Man and Heroin are thrilling in their own ways, and versions of Some Kinda Love and We're Gonna Have a Real Good Time were always solid and energetic, with interesting nuances in guitar interplay and in how hard they dig in. Really, even if a definitive version of a song could be determined, no other version here is invalidated or less worthwhile to listen to. The VU are absolutely brilliant here.

I could only dream of what Run, Run, Run (BTP 1/10/69) or Foggy Notion (Quine, Family Dog) would have sounded like in this sound quality!
Top

I am debating getting this since I own so much VU already and times are tight. Does anyone know if there is anything on this vinyl set that is NOT on the CD set? I know vinyl always sounds superb, but other than that, are there any new versions or anything not on the CD box set? thanks
Top

I think it's been established that there is nothing on the vinyl that isn't on the CDs. I'm still on the fence too.
Top
Post Reply
18 posts