For discussion of all aspects of the New York legends.
Post Reply
4 posts • Page 1 of 1

Incubator for the Velvet Underground: From a dingy apartment, an iconic band launched the downtown art-rock movement

When I moved into 56 Ludlow St. in early 1964, [Manhattan's] Lower East Side was a pretty bleak place. It was grimy times, and there wasn't much activity around here at night. The entire neighborhood was dark—except for the solitary bulb burning in the tea merchant's window on the ground floor. No matter how late I came home, the guy was always sitting in that window in the pale yellow light. It was eerie, but it fit the whole scene down here.

I live in Los Angeles now and haven't been back to this building in almost 50 years. Actually, I'm surprised it's still here. I was just told it's an artists' co-op today, which is gratifying to know. Emotionally, I feel confusion returning here. I'm trying to appreciate what's changed, but at the same time I'm feeling some nostalgia for the place. I remember the good times we had here, where we cracked some ideas. But you can't re-create that.

In the fifth-floor apartment in '65, Lou [Reed], Sterling [Morrison] and I combined the music of Erik Satie, John Cage, Phil Spector, Hank Williams and Bob Dylan. The result was a new form of rock—more about art than commerce. We rehearsed, we experimented, and the six songs we taped in the apartment in July '65 on our Wollensak recorder wound up being the basis for our first album in '67—"The Velvet Underground & Nico."

I'm originally from Wales, and I studied music and composition at the University of London's Goldsmiths' College. While there, I had met [composer] Aaron Copland, who helped me get a summer scholarship to the Tanglewood Music Center in Massachusetts in '63. At the end of the summer, I moved to New York. I wanted to be cut off from distractions, so I could think freely and creatively.

When I arrived in the city, I began playing viola in an experimental performance group led by La Monte Young. John Cage had introduced us. In September '63, I performed on piano with Cage during an 18-hour marathon concert at the Pocket Theater on Third Avenue near 13th Street. A week later, I went on a CBS TV show called "I've Got a Secret." The panel had to guess my connection to the other guest—he was the only one who had sat through the entire performance.

In La Monte's group, I met [experimental filmmaker] Tony Conrad. He invited me to move into his one-bedroom apartment at 56 Ludlow and split the $25 monthly rent. The building was filled with single-minded artists then like poet Angus MacLise, filmmaker Piero Heliczer, director Jack Smith and actor Mario Montez.

Our apartment was a railroad flat—a long room running from the windows in the front to a small bedroom and a bathroom in the back. I slept on a mattress, under the windowsill in the front overlooking Ludlow. We burned crates and furniture in the fireplace to keep warm. There was no heat in the winter other than the gas stove.

Tony and I lived on what we could afford—mostly canned stew and milkshakes. Across the street in the morning, you could hear kids from the nearby high school singing doo-wop in the doorway there. Other kids threw rocks at us because they thought we looked like the Beatles. A lot of guys around here didn't like them early on.

One night in '64, Tony and I went to a party and met Jerry Vance of Pickwick Records. Jerry said we looked commercial and asked if we wanted to record and play gigs to support a newly written pop song called "The Ostrich." He invited us out to Queens, where I met Lou [Reed], who was a staff writer for the label.

I know a lot of books say that Lou moved into the apartment Tony and I shared, but he never did. After graduating from college, Lou continued to live at home in Freeport, on Long Island. When Lou and I began working hard on ideas for the band, he'd commute in on the weekends to the apartment.

When we rehearsed, we weren't too loud. We only had acoustic instruments and the most basic amps. We stole electricity from other apartments, so wires snaked all over the place. Besides, the people downstairs were always blasting music on the radio, so no one in the building heard us or complained.

At first we called ourselves the Warlocks and then the Falling Spikes. But these names weren't very poetic or intriguing. Then one day we saw an S&M novel Tony had found on the street called "The Velvet Underground." It was perfect. There was nothing velvet about the underground world we were living in, that's for sure.

When [drummer Maureen] "Moe" Tucker joined in late '65, we began looking for gigs in the city, but we didn't catch on immediately. We were playing a new form of expressive rock—not three-minute transistor-radio hits. Club managers wanted us to cover dance singles. We agreed to do that but never would and kept getting fired.

As we struggled, the apartment took on the aesthetic of a coal mine. But I was happy living the artist's dream. Sitting around not knowing what we'd come up with was exciting. Tony moved out at the end of '65, and I moved out shortly after to a loft on nearby Lispenard Street.

I wish I had taken the bedsprings Tony and I wedged against the front window. Tony had skinned down a mattress, and the bedsprings let in light and air and kept the bad guys from entering off the fire escape. The bedsprings symbolized everything—danger, edge, minimalism. It would make a nice art piece today.

—as told to Marc Myers
Top

Thanks for posting. Good that Cale was willing to reflect and go back, but shame there wasn't shots of inside - maybe that's coming in a longer documentary piece?

Spotted this from the roof footage.. 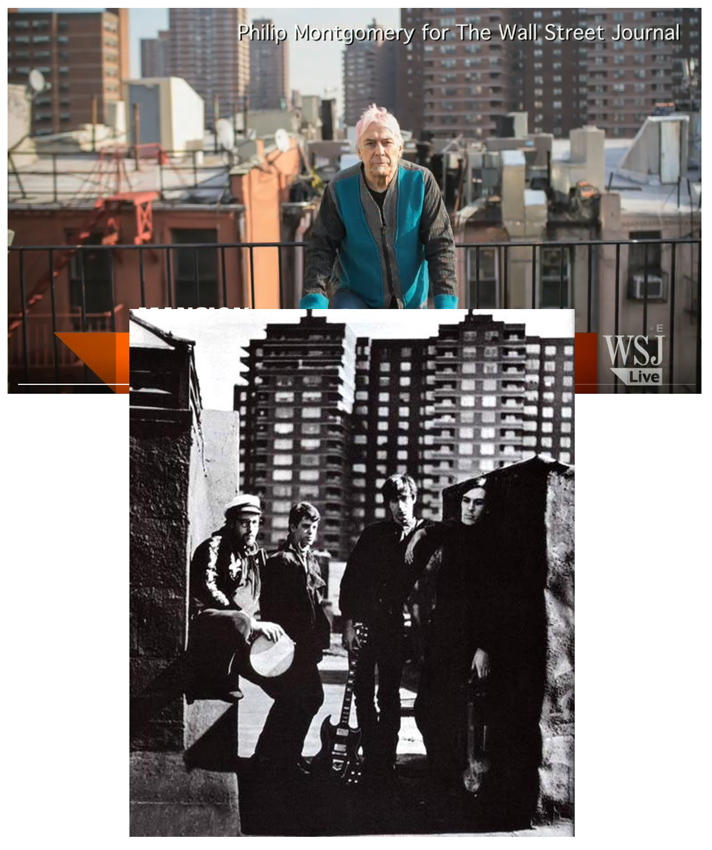 At times, it's been said that Cale shared Ludlow with Reed. And yet here, he [Cale] says that he moved out shortly after Conrad.

In this article - also about Ludlow:

He specifically does say that Reed never lived there. I guess many will know that already, but I had not realised that before. Even Olivier Landemaine's site still says that Reed shared Ludlow with Cale. (scroll down to December 1965):