For discussion of all aspects of the New York legends.
Post Reply
18 posts 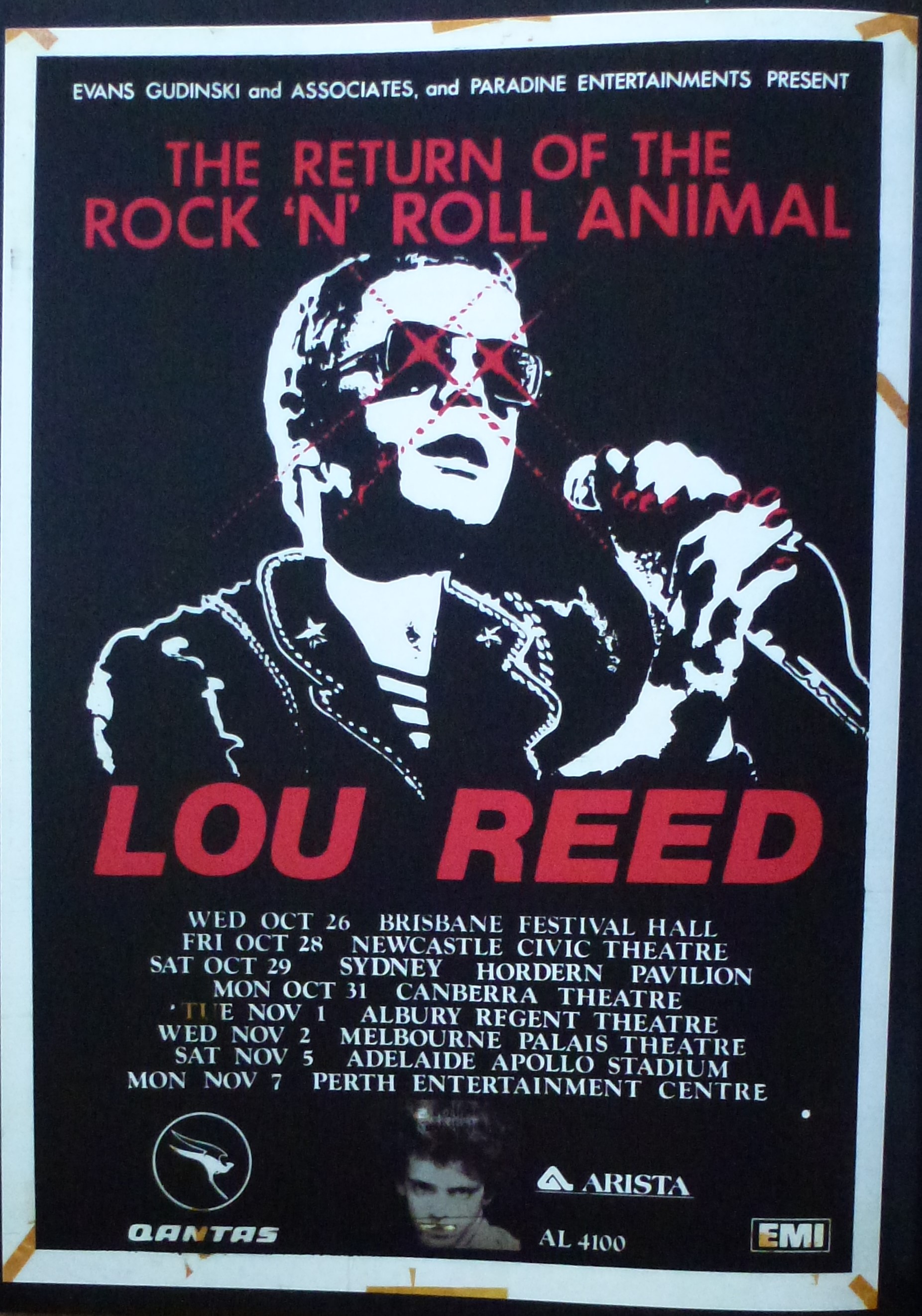 Apr.09 - TV talkshow "Aad van den Heuvel" [21:50, NED.1, KRO, the catholic public broadcasting arganization] - CANCELLED
--announcement in Het Parool [Apr.09] - delpher.nl/nl/kranten/view?identifier=ABCDDD:010839814:mpeg21:a0292&query=%28lou+reed%29
from OOR: planned to accompany himself on guitar and play "Walk on the Wilde Side" and "Heroin", cancelled together with Groningen show because of "illness"
my note: show can not be live, but should have been pre-recorded as broadcast at same time as planned [but also cancelled] concert in Groningen

May.01 - Evenementenhal, Groningen - replacing cancelled Apr.09 concert - last show of European Tour [!]
--news in Nieuwsblad van het Noorden [Apr.23] - delpher.nl/nl/kranten/view?identifier=ddd:011017834:mpeg21:a0054 - mentions try of even a 2nd concert, but venue didn't have a free day anymore
--review with picture in Nieuwsblad van het Noorden [May.02] - delpher.nl/nl/kranten/view?identifier=ddd:011017840:mpeg21:a0198 - 2 hour show followed by 75 min.encore [!] with only recent and unknown songs, sounding like a jam session; also a strange "faggy" [literal translation] person assisted with some singing [must have been Rachel]


NOTE: as maximum 2 links per post, I deleted the http-parts and you have to copy the urls into your browser
delpher.nl has both cutting and full page download options
Top

can the Cale page be posted too?
Top

any pics with Ritchie Fliegler from this tour?
Top

Was Lou scheduled to do a tour of the US in early 1977? According to this clipping (taken from the 6 Feb 1977 issue of the St. Louis Post-Dispatch, according to newspapers.com), there were def. dates scheduled...and at least one was cancelled. 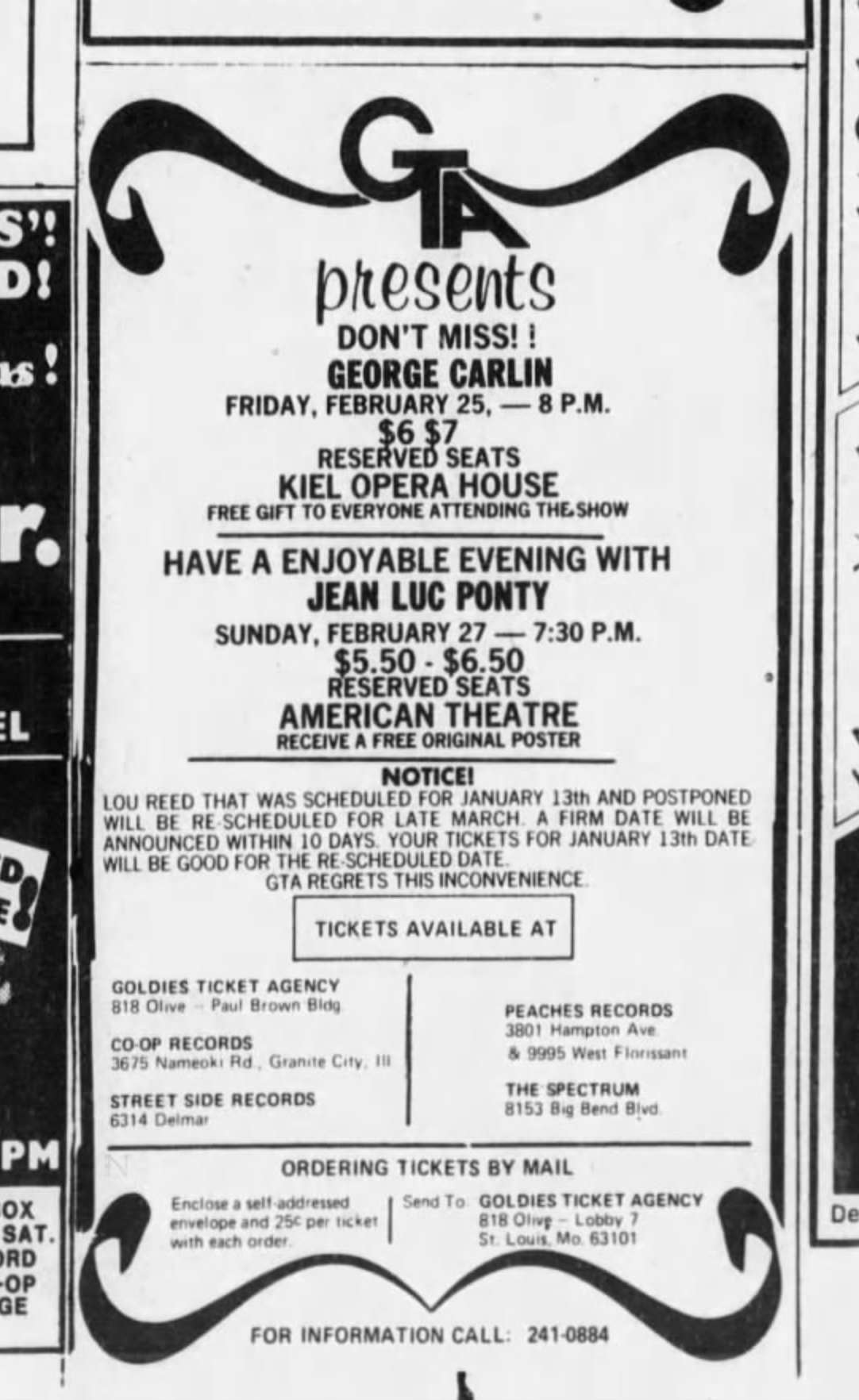 Did some searching [at newspapers.com] and found that the cancellations started at the end of 1976, details see my reply at Gigography 1976.
Other dates scheduled and cancelled in early 1977 I found: Jan.14 in Memorial Hall, Kansas City and Jan.15-16 in State Theater, Minneapolis 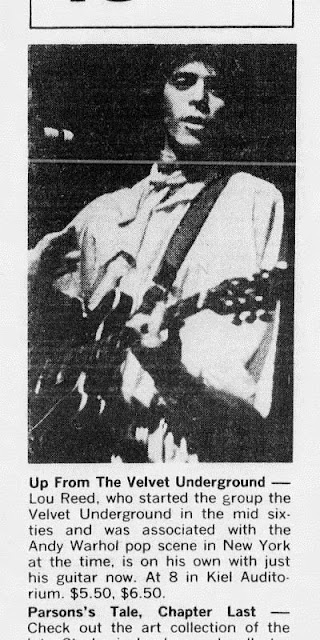 acc.article in [Minneapolis] Star Tribune of 1977.Jan.05 - page 5B
"Lou Reed concert canceled - Singer-songwriter Lou Reed's concerts Jan. 15 and 16 at the State Theater in Minneapolis have been canceled because of Reed's illness. The promoter, Schon Productions, said ticket holders may receive refunds at the place of purchase or tickets may be retained for rescheduled concerts. New dates have not been set."
newspapers.com/newspage/186857741/?terms="lou%20reed" 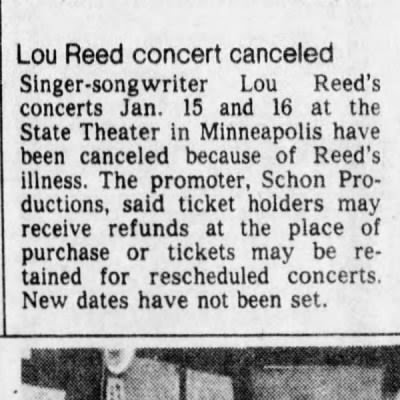 Another item I found for the 1977 Gigography is about the Mar.28 concert in Aarhus, DEN

Danish Rock Fans Riot After Bottle Is Thrown
COPENHAGEN, Denmark, March 29 (UPI) - Several hundred fans ran wild last night at a concert given by American rock star Lou Reed. Police with dogs were called to restore order. Reed was giving a concert at Aarhus when an empty beer bottle was thrown, nearly hitting him. Reed left the stage and refused to return. Then the fans overturned a stage piano and tried to set fire to the stage. Police were called and a brawl started. Several persons were injured, none seriously. 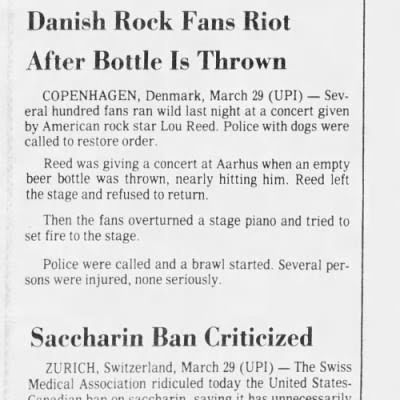